The Ghost – Movie of the Week 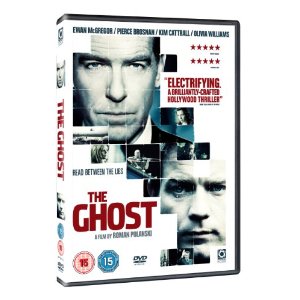 A ghost writer stumbles onto a secret that places his life in danger as he takes down the life story of a former U.K. prime minister in this Roman Polanski-helmed adaptation of the Robert Harris novel. Convinced by his agent that he’s been granted a once-in-a-lifetime opportunity, talented British screenwriter “The Ghost” (Ewan McGregor) agrees to aid British prime minister Adam Lang (Pierce Brosnan) in completing his memoirs after the leader’s former aid dies under mysterious circumstances. Almost immediately after The Ghost arrives at a remote mansion in the U.S. to begin working with the prime minister, Lang is accused of committing a war crime by a former British cabinet minister. Amidst a deluge of protestors and reporters, The Ghost delves into the unfinished manuscript and comes to the terrifying conclusion that his predecessor died because he discovered a link between Prime Minister Lang and the CIA. The more information The Ghost uncovers, the more convinced he becomes that his life could be in danger as well. – Original Review

This is Roman Polanski adaptation of the Robert Harris novel. This is a good political drama about a writer who ends up writing the autobiography for the prime minister of England. It stars Ewan McGregor, Pierce Brosnan, Kim Cattrell and cameos by James Belushi, Timothy Hutton and Eli Wallach. He finds out his secrets and then we see how think unravel when the powers that be go after him. Very stylish and set in New England, This is very much in the style of many of the Roman Polanski films. Worth the watch but I would not buy it on DVD.

This entry was posted in Movie Of The Week, News and tagged Movies. Bookmark the permalink.