The A-Team Movie of The Week 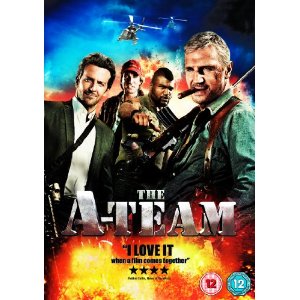 Give it up to the A-Team: they’ve always been good at demolishing things in big, big ways. Freed from the confines of the 1980s TV series, the 2010 blockbuster movie version allows the four members of the paramilitary squad to really amp up the mayhem to newly crazed heights. Liam Neeson plays team leader Hannibal Smith (inheriting the cigar-chomping from the show’s George Peppard), and pro wrestler Quinton “Rampage” Jackson is “B.A.” Baracus, the TV show’s most iconic character (insert Mr. T “I pity the fool” joke here). As the vain Face, Bradley Cooper preens in convincing fashion, and District 9 out-of-nowhere star Sharlto Copley plays the unhinged pilot “Howlin’ Mad” Murdock. These boys are on the trail of some money-counterfeiting plates, from Bagdad to Germany to places in between. It would be understating it to say that the plot is not of primary importance, although Patrick Wilson has some fun as a CIA official and Jessica Biel occasionally strikes poses as Face’s ex-flame, now a military officer displeased with the A-Team’s extra-legal shenanigans. The storytelling is insipid and half-hearted–but when it comes to snarky dialogue and two-fisted action scenes, director Joe Carnahan is in his comfort zone. It’s reasonably fun watching the working-out of such logistical puzzles as dropping a tank (with crew inside) from a plane, or scattering the main characters on a dockside as cargo containers rain down from a ship looming above them. Good times, although is it asking too much for certain basic laws of physics (if you drop a human body ten stories, for instance, it might actually sustain injuries) to be used as a guideline? But worrying about such matters isn’t in the spirit of The A-Team, which cheerfully ignores the petty concerns of credibility and logic. –Robert Horton – Read original review click here.

If you are like me and loved sitting in on a Saturday evening watching the A-Team in the mid to late 80’s then you will certainly like maybe love this movie. I thought it stayed somewhat true to the original series. It’s got loads of  big action set peaces (“Flying a Tank”), Funny one liners and lots of “I Pitty the fool” but I did feel we should have seen a little more of the van and a little more of the building stuff part of the original A-Team. The plot is wide open for a second so maybe then we will see more of the above. I thought it was easy to watch, no brainer kind of movie but I did see the twist coming. Cast wise it was great but Murdock could have been a bit funnier and Liam Nesson could have done with smoking more cigars. I hope you enjoy the movie and I love when a plan comes together.