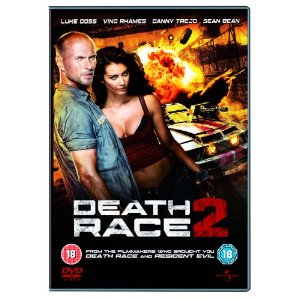 In the not too distant future, the United States economy is in decline and violent crime is spiralling out of control. In an attempt to regain power over the growing criminal population, a vast network of for-profit, private prisons has opened up. But rather than solving society’s problems they have created a lawless subculture run by gangs, killers and sociopaths.

On his arrival at Terminal Island Prison, convicted cop-killer Carl Lucas (Goss) finds himself thrown into the spotlight as a ruthlessly ambitious television personality, September Jones (Lauren Cohen; Van Wilder 2: The Rise Of Taj, Supernatural), launches the ultimate reality show, Death Race, with him as her star driver. The brutal prison yard demolition derby pits the already violent and uncontrollable prisoners against each other in heavily reinforced and seriously dangerous armed vehicles. The prize is freedom; but will anyone survive to enjoy it?! – Read more on Play.com click here.

Do not watch this movie!!! Such a waist of time. I thought it would have been good or at least match the action of the original ( yes I know it was a remake). This is a prequel to the 2008 version. Basically it the back story of how Frankenstein became who he is in the first movie. Really there was no need for this movie. This could have been a whole lot better with a lot more action. The acting was not bad but they did not have a lot to work with. In my opinion “Stay clear of it”.

This entry was posted in Bad Movie Of The Week and tagged Bad Movies, Movies. Bookmark the permalink.