Savage – Movie Of The Week 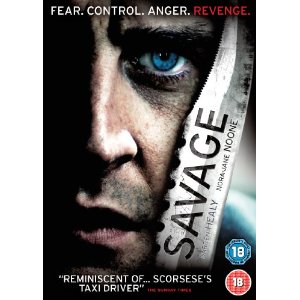 Set in Dublin, director Brendan Muldowney’s searing thriller follows the trials and tribulations of a man who is left to pick up the pieces after surviving a savage, unprovoked attack.

Paul Graynor is an aliented press photographer who lives in a threatening and hostile city and it was only a matter of time before he became the victim of a serious crime. Finding himself the subject rather than the purveyor of an inner city tabloid story, Paul tries to come to terms with the attack though the scars both physical and psychological prove impossbile to heal. As Paul struggles to come to terms with his ordeal his metamorphosis begins – from victim to avenger. Click here to read original article.

This film was in a lot of “Top 5 Irish movie of the year lists”. I was afraid it was going to be a bid “stage Irish” i.e. stiff and looks like they are on a stage. I was pleasantly surprised and all in all it was very well acted and there are some really gruesome scenes as well. Darren Healy (Disco Pigs, Crush Proof) play the lead for witch he does a great job. This certainly goes further that any other Irish film in acting and in violence. Not you typical Irish film and I liked that about it.