The Social Network – Movie of The Week 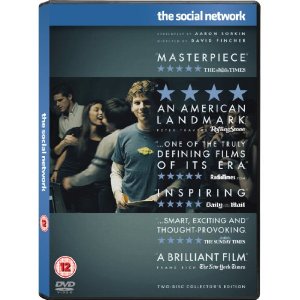 Well this movie is about how Facebook was set-up and what happened to the people – Mark Zuckerberg, Eduardo Saverin – involved with it’s set-up. Mark Zuckerberg is the brain behind the operation and Eduardo Saverin was the money behind it. I thought this was a very good movie, very well acted(Jesse Eisenberg – Adventureland, Rodger Dodger ) and directed (David Fincher – the game, Fight club, Se7en) and written (Aaron Sorkin – The west wing, studio 60 on the sunset strip). I was not too sure what to expect with this. I was told a bit about it and how Mark Zuckerberg came across as being an asshole. I did not see that myself. He did have an idea that he wanted to get out there and yes he may have done over his best friend (not too sure if he was, maybe he was just a very good acquaintance, not too sure if Zuckerberg let too many people that close) but business is business and it is cut through. When you have two ambitious people on the same project moving very fast you will have causalities.
Any way I think it will get a lot of Oscars and get lot of awards all over the world. Check out their website for more on The Social Network click here

They all laughed at college nerd Mark Zuckerberg, whose idea for a social-networking site made him a billionaire. And they all laughed at the idea of a Facebook movie–except writer Aaron Sorkin and director David Fincher, merely two of the more extravagantly talented filmmakers around. Sorkin and Fincher’s breathless picture, The Social Network, is a fast and witty creation myth about how Facebook grew from Zuckerberg’s insecure geek-at-Harvard days into a phenomenon with 500 million users. Sorkin frames the movie around two lawsuits aimed at the lofty but brilliant Zuckerberg (deftly played by Adventureland’s Jesse Eisenberg): a claim that he stole the idea from Ivy League classmates, and a suit by his original, now slighted, business partner (Andrew Garfield). The movie follows a familiar rise-and-fall pattern, with temptation in the form of a sunny California Beelzebub (an expert Justin Timberlake as former Napster founder Sean Parker) and an increasingly tangled legal mess. Emphasizing the legal morass gives Sorkin and Fincher a chance to explore how unsocial this social-networking business can be, although the irony seems a little facile. More damagingly, the film steers away from the prickly figure of Zuckerberg in the latter stages–and yet Zuckerberg presents the most intriguing personality in the movie, even if the movie takes pains to make us understand his shortcomings. Fincher’s command of pacing and his eye for the clean spaces of Aughts-era America are bracing, and he can’t resist the technical trickery involved in turning actor Armie Hammer into privileged Harvard twins (Hammer is letter-perfect). Even with its flaws, The Social Network is a galloping piece of entertainment, a smart ride with smart people… who sometimes do dumb things. –Robert Horton – click here to see original