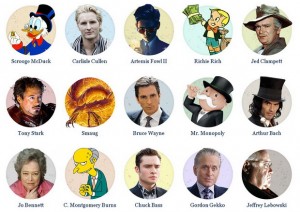 There are Ducks, Vampires, Hillbillies, an Iron Man and a Hobbit. What do they all have in common – Forbes Fictional 15.

The Forbes Fictional 15 is a list generated by Forbes magazine that lists the 15 richest people in the realm of fiction. The members are characters from movies, books, cartoons and television. The current list was written in 2011. See the Rich List below.

To qualify for the list members must be “both fictional (in the sense that we excluded mythological and folkloric figures) and characters (meaning they are part of a narrative story or series of stories),” in addition to being wealthy. The one exception to the rule was Santa, a mythological character, whom Forbes decided was an “irresistible” addition, although he has been absent from the list since 2006. Forbes stated, “We still estimate Claus’s net worth as infinite, but we excluded him from this year’s rankings after being bombarded by letters from outraged children insisting that Claus is ‘real.’ We don’t claim to have settled the ongoing controversy concerning Claus’s existence, but after taking into account the physical evidence—toys delivered, milk and cookies devoured—we felt it was safer to remove him from consideration.”