The Fighter – Movie of The Week 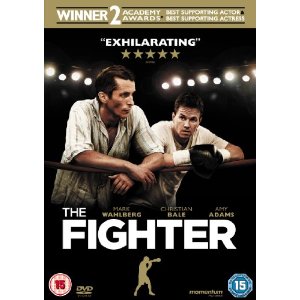 This is a good Oscar Winning Movie. This is a story of a family that is obsessed with boxing and getting their sons to box for the world championship. But it is also about the affect on a family torn apart by a mett addicted son. Wahlberg is great but bale is so much better. He steals the scenes but I think it was like that for the 2 brothers in real life considering the interview with them at the end of the movie. I thought it was going to be life the movie the wrestler but it was so much better. Melissa Leo is great and Amy Adams is quiet good. Well worth the watch. I think it would have won more Oscars if the kings speech was not in the running. Check it out.

It would be a mistake to confuse The Fighter with the story of Mark Wahlberg, though the similarities are striking. Completely convincing as a boxer, Wahlberg plays welterweight Micky Ward, who grew up in working-class Massachusetts. Like the actor-producer, he had eight siblings, one more famous than the rest. Ward’s half-brother, Dicky Eklund (a gaunt, crazy-eyed Christian Bale), turned to boxing first, just as Mark’s brother, Donnie, preceded him as a performer (first by singing, then by acting). The similarities end there: Dicky, once known as “The Pride of Lowell,” traded his promising pugilistic career for a crack pipe (Sugar Ray Leonard cameos as his best-known opponent). As David O. Russell’s film begins, the smothering Alice (Frozen River’s Melissa Leo) manages Micky’s career, while the unpredictable Dicky attempts to train him. Despite his talent in the ring, though, Micky can’t catch a break until he meets Charlene (Amy Adams), a spitfire of a bartender who encourages him to stand up for himself. When Dicky ends up in prison, and Micky takes on a more experienced manager, his fortunes start to improve, but it isn’t in his nature to abandon the people who raised him, so he attempts to unite the various factions in his life before his shot at the world championship slips away. Though Russell paints Micky’s mother, brother, and sisters with a broad brush, Wahlberg anchors the scenario with his patient, level-headed performance. Rescue Me’s Jack McGee also deserves notice as his diplomatic dad, George. –Kathleen C. Fennessy, click here for original article.