Neds – Movie of The Week 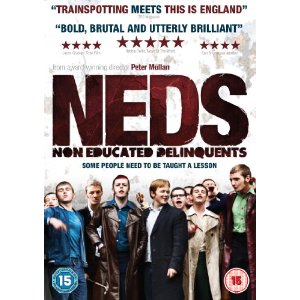 If it is a Peter Mullan movie (My name is joe, The Magdalene sisters) then you have to watch it because you know it is going to be hard hitting, bleak and a very good movie. This does not disappoint. It is made in a similar vein as Dog Pound and Scum. The acting is great and look of the film set in the mid 70’s is even better. I did notice a pair of pajamas I used to ware back then in the late 70’s and early 80’s. It was a nice touch. Basically it is a story of a good boy gone bad but it also feels that maybe there was a bit of bad in him all along that was dying to come out. I would also mention I did have to put on the subtitles at the start for the first 10 minutes because the Scottish accents were pretty strong. This is a good hard hitting movie and well worth the hype it has received.

Neds (Non Educated Delinquents) is the story of a young man’s journey from prize-winning schoolboy to knife-carrying teenager. Struggling against the low expectations of those around him, John McGill changes from victim to avenger, scholar to NED, altar boy to glue sniffer. When he attempts to change back again, his new reality and recent past make conformity near impossible and violent self determination near inevitable.

Peter Mullan takes the directorial helm once again in his third feature length film, returning to 1970′s Glasgow in NEDS (which stands for ‘Non-Educated Delinquents’), a personal but not autobiographical tale. John McGill is a confident young man, an academic genius and full of potential, however dark clouds lie ahead for him. A poor background, dysfunctional home, an alcoholic father and a repressed mother, are at the root of the problems heading the young man’s way. His school has one or two good teachers, but most are uninterested and unhelpful in the face of bullying and overwhelming gang culture which has spread from local housing estates to the schoolyard. – click here to read more.