Miracle at St Anna – Movie of the Week 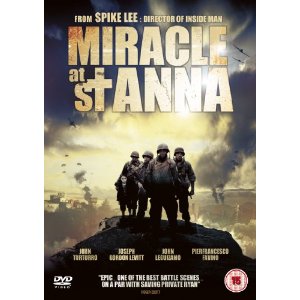 If you like spike lee movie you will certainly like this. The story is about black soldiers (buffalo soldiers) in world war 2 who get separated from there battalion and end up taking shelter in a small town in Tuscany Italy and end up helping a young boy along the way. Clearly the story starts in New York (all spike lee movies take place in or around NYC), and movies to Italy with Italian actors speaking Italian and German actors speaking German. I am glad it was not Italians and Germans speaking English as it would have ruined the feel of the movie. Spike lee gives us his usual long takes and steady cam shots witch are the bread and butter of movies like the inside man and 25th hour. This is a good take on the war movie film and it works very well. Enjoy this, In Spike we trust ….

MIRACLE AT ST. ANNA tells the story of four soldiers caught behind enemy lines. During their attempt to return to base, they befriend a traumatized young Italian boy and soon find themselves in a remote Tuscan village – with civilians who have never even seen other ethnicities before. Strong relationships soon develop between those who would never have met in ordinary life and who understand and help each other against the horror of war. They know the need to learn to overcome cultural and language barriers and form an allegiance for the terrifying oncoming Nazi attack. Directed by revered film-maker Spike Lee (DO THE RIGHT THING, MALCOLM X) featuring an all-star cast including John Turturro (THE BIG LEBOWSKI, O BROTHER, WHERE ART THOU?), Laz Alonso (AVATAR), John Leguizamo (ROMEO AND JULIET, MOULIN ROUGE), Joseph Gordon-Levitt (INCEPTION) and Kerry Washington (RAY, THE LAST KING OF SCOTLAND), MIRACLE AT ST. ANNA pulls at the heart-strings and has left audiences world-wide with long-lasting impressions. Based on the novel by acclaimed writer James McBride, MIRACLE AT ST. ANNA centres on the famous Buffalo Soldiers -the 92nd Infantry Division, consisting of 15,000 African-American soldiers serving in Italy during the Second World War. click here to read more