The Eagle – Movie of The Week 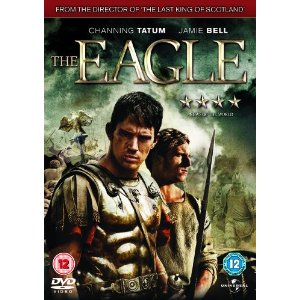 Not a bad movie in this genre of film. Kevin Macdonald – One day in September, Touching the Void, Trainspotting and State of play – is clearly a good director but in this movie I don’t think he stuck to what he knew. The acting was all right and it had a good enough cast even if the plot was a bit dodgy at parts. Kevin Macdonald directing style starts off in a Ridily Scott/ Tony Scott kind of way in that first you get “Gladiator” then a bit of “Robin Hood” and even a bit of “Kingdom of heaven”. This is not a bad thing but it needs to go somewhere as a film and it looses it’s self in the middle and does not find it’s self till the end and then it’s over. It’s watchable, better than “Centurion” “Ironclad” and “Clash Of The Titans” but not as good as “Arn: Knight Templar”.

Epic filmmaking has fallen out of favour, but The Eagle fights hard to bring it back. Marcus Aquila (Channing Tatum) chose to lead a Roman garrison in occupied Britain because that’s where his father lost a military standard–a metal eagle, representing the glory of imperial Rome–on an expedition into the northern wilds. To reclaim his family honor, Aquila sets off into native territory to recover the eagle, with only a slave named Esca (Jamie Bell) to help him–but the more Aquila learns about Esca’s history, the more he has reason to doubt his slave’s loyalty. The Eagle starts with engaging momentum; this is a work of fiction, but there’s an impressive commitment to the details of life, evoking the sights, sounds, and smells of a raw and brutal time. (Director Kevin Macdonald began as a documentarian, which no doubt contributes to his appreciation for grit and sweat.) Tatum is not the most versatile actor but he has enough solid charisma to anchor the movie; Bell’s fluid emotional presence keeps their relationship dynamic. The movie loses steam in the last third, as the outcome is never really in doubt and the plot mechanics start to feel a bit rote. But for anyone with an interest in the era, or who simply enjoys a taste of blood and thunder, The Eagle has pleasures aplenty. –Bret Fetzer, read more of the original article.