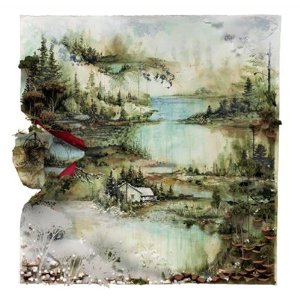 I heard Bon Iver’s first album “For Emma, Forever Ago” and I thought this is a great album. You could hear the log cabin it was recorded in in Wisconsin in the back ground. There was something deep in the forest about it. While listening to this I reckoned that his second album when it comes will not be as good. Oh how I was wrong. The second album “Bon Iver” is as good as the first if not a little better. I will say it is a grower but how does it grow. He has clearly expanded on the instruments available to him and this gives a fuller sound and some what more mature sound. Starting with Perth the sound echoes and burns the whole way through the album, Justin Vernon voice sounds great through out the album to the very end song Beth/Rest. You won’t here single after single on the radio from Bon Iver, he is just not that kind of artist. The album is better as a whole. Buy the album and enjoy the sound of Bon Iver.

Whatever maudlin magic musician Justin Vernon found in the remoteness of rural Wisconsin come the close of 2006 and the dawn of 2007 – made devastatingly real on his debut LP as Bon Iver, For Emma, Forever Ago – it’s something that many another artist has been trying to conjure since. Dispatch a band into isolation today, to cajole those creative juices, and inevitably some plucky press type will label them as “”doing a Bon Iver”". The album’s impact on today’s indie-folk scene, and beyond, was powerful, and global commercial success was the unlikely culmination of Vernon’s catharsis following the break-up of both his previous band and a relationship.

For this follow-up, Vernon and band – among them Sean Carey, whose own solo debut, We All Grow, was released to fine reviews in the summer of 2010 – have developed the sound of For Emma… without over-stretching themselves and making a mess of arrangements which are all the more effective for their striking intimacy. There must have been temptation to draft in a name producer – but Vernon sees to that side of the process too, and this control has resulted in a set that’s as arresting in its first few seconds, Perth’s rolling percussion providing a base for Vernon’s exquisite emoting, as it is come the David Gilmour-styled guitar showmanship of closer Beth/Rest. This is how to spend an improved budget (though anything is more than nothing), and expand a sonic palette, without compromising what appealed in the first place. –Mike Diver, read more