Hanna – Movie Of The Week 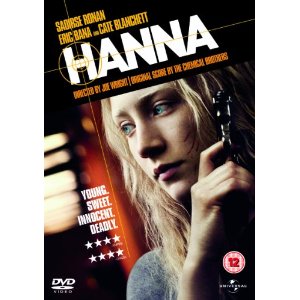 This is a story of a girl and her father hunted by a secret agency through out Europe. Saoirse Ronan plays the girl and Eric Bana plays the father and Cate Blanchett plays the head of the agency. This is a fast passed movie with shooting and chases and fighting all the way through. This is another fine profromance by Saoirse Ronan. It is good to see a female lead in an action movie. This is well worth a watch and a listen considering the Chemical Brother did the soundtrack.

Award-winning director Joe Wright creates a boldly original suspense thriller with Hanna, starring Academy Award®-nominee Saoirse Ronan (The Lovely Bones, Atonement) in the title role. Raised by her father (Eric Bana of Star Trek), an ex-CIA man, in the wilds of Finland, Hanna’s upbringing and training have been one and the same, all geared to making her the perfect assassin. The turning point in her adolescence is a sharp one; sent into the world by her father on a mission, Hanna journeys stealthily across Europe while eluding agents dispatched after her by a ruthless intelligence operative with secrets of her own (Academy Award®-winner Cate Blanchett). As she nears her ultimate target, Hanna faces startling revelations about her existence and unexpected questions about her humanity. – read more on amazon.co.uk click here