Blitz – Movie of The Week 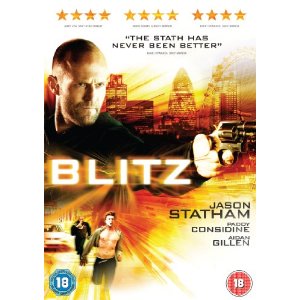 I picked up this film thinking that this is another Jason Statham beet the crap out of everyone film. I was pleasantly surprised to find that I was wrong – kind off. Yes he does go around beating up people and using great lined like “This is a Hurley, It’s used in the Irish game of hurling. It’s a cross between hockey and murder” but does not beat up as much people as usual. There is a good story running through out. Paddy Considine (gay copper) and Aiden Gillan (blitz) give great performances all the way through and it is certainly worth a watch. One of the better English Cop movies form the last few years. This is our Movie of The Week.

Is there an action movie star with the consistency and work ethic of Jason Statham? Few seem as prolific, and while Blitz in some ways follows the template of some of his earlier work, there’s a few really quite interesting touches squeezed in between the credits here.At heart, Blitz feels like one of those old-fashioned ‘70s cop thrillers that they apparently don’t make any more. Statham is the old fashioned detective who refuses to play by new rules, with his outlook on life hardly in line with politically correct thinking. And he’s up against an extremely unpredictable, volatile foe in the shape of Aiden Gillan’s cop killer.

The two are kept apart for much of Blitz, and this is one of the film’s many wise steps. It allows both to build up respective heads of steam, with Gillen in particular proving to be a really quite distinct villain, and an extremely nasty one. Behind the camera, you can’t help but feel that director Elliott Lester has done his homework, too. Stylishly, but not fussily, edited, Blitz is gritty, pacy, and knows not to outstay its welcome. There are elements of the film that you’ll have felt you’ve seen before, and there are few surprises to Statham’s performance in particular. Yet that proves to be one of the movie’s strengths, and it’s hard not to chalk Blitz up as another highly watchable entry on Jason Statham’s CV. A good, solid, action thriller. –Jon Foster- read more, click here