Before you diagnose yourself – Quote of The Week 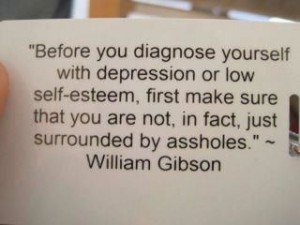 This week quote of the week comes from William Gibson.

“Before you diagnose yourself with depression or low self esteem, first make sure that you are not, in fact, just surrounding yourself with assholes.”
― William Gibson

William Ford Gibson (born March 17, 1948) is an American-Canadian speculative fiction novelist who has been called the “noir prophet” of the cyberpunk subgenre. Gibson coined the term “cyberspace” in his short story “Burning Chrome” (1982) and later popularized the concept in his debut novel, Neuromancer (1984). In envisaging cyberspace, Gibson created an iconography for the information age before the ubiquity of the Internet in the 1990s. He is also credited with predicting the rise of reality television and with establishing the conceptual foundations for the rapid growth of virtual environments such as video games and the World Wide Web.