My Tram Experience – Viral Video of the Week 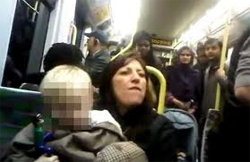 My Tram Experience ranter to spend Christmas in prison

The racist tram lady’s spending Christmas in prison. But is she a typical example of rage, or a one off? There are deeper issues to explore.
Emma West, the 34-year-old woman accused of being racially abusive on a tram, has been remanded in custody over fears for her safety. She has been the recipient of death treats – her address has been given out on Facebook and Twitter. She has yet to enter a plea, having initially pleaded “not guilty” due to an adminstrative error. The video of her outburst has been viewed on YouTube over 11 million times, reported the BBC. It’s raised some uncomfortable issues about race and immigration.

Speaking the truth? Emma West has her supporters – a blog on The British Resistance website saluted what they called “this British Lioness” for speaking the truth about how she felt.

But is Britain really like that? The video is immensely hard to watch, said Jenny McCartney in The Daily Telegraph. There have been others, too, showing the fury of young white women surrounded by foreigners. But Britain isn’t “especially racist.” These videos show “a deep and toxic well of pent-up rage.” There is “cultural degradation” here, too, shown in West’s inarticulacy. Though the middle classes think the working classes are “inherently racist”, it isn’t true – it’s just that the ones that are speak louder. Most of the time, most of Britain is “increasingly unconcerned about race.” However, it’s hard to question mass immigration without being thought a “bigot” – which is “ridiculous.” We need to take the issues separately. Mass immigration has coincided with a lack of self-esteem in the white working classes; their “pride and aspiration” have been eroded. We need to work harder to “find a Britain defined by any values at all.”

Watch the video, in the unlikely event that you are not one of the 11 million who all ready have. read original