A Year in New York – Viral Video of The Week 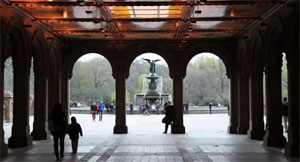 A Year in New York by Andrew Clancy is our Viral Video of The Week. Great Video, Great Song, Great City.

Andrew Clancy - Living in New York I’d grab my Canon 7D, or S95, and shoot footage of what was going on around me. It seemed like a never ending project and you could stay filming life in New York for a long time. But eventually I put my camera down and started to edit. Here’s the end result, it’s a bit rough and ready but that’s life in the Big Apple I guess.

The video has gotten an amazing response though people have rightly asked where is the footage of other aspects of New York life like the Yankees or certain neighborhoods and parts of the city. I think I should’ve called it My Year in New York! I couldn’t feature every part of the New York story, just the parts I experienced while I had my camera. If it’s not in the video it doesn’t mean I didn’t enjoy it!

Turn up the volume or put your in earphones for the beautiful song ‘We Don’t Eat’ by Irishman James Vincent McMorrow.