Colombiana – Movie of The Week 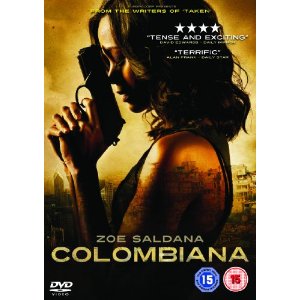 “Cataleya is a young woman who has grown up to be an assassin after witnessing the murder of her parents as a child. Turning herself into a professional killer to get her revenge on the mobster responsible for her parents deaths”. Add to this lots of guns and the very sexy Miss Zoe Saldana. What more could you ask for. Basicly it’s better than “Salt” and has great action from start to finish. Enjoy

As a producer, Luc Besson (The Transporter series, Taken, District B-13) has made extremely profitable B-movie hay out of a fairly strict formula incorporating whisper-thin femme fatales, parkour, Gaultier, and guns. Colombiana, another Besson collaboration with director Olivier Megaton (Transporter 3), doesn’t exactly blaze new trails, but the combination of Zoe Saldana’s fierce performance and a dash of oddball surrealism sure makes the running time zoom by. Purportedly beginning as a sequel to The Professional, the story follows a beautiful South American assassin bent on rubbing out the murderers of her parents. Unfortunately, the closer she gets to her drug lord prey, the more her own loved ones (including Michael Vartan and an amusingly hambone Cliff Curtis) are put at risk. Things go boom, frequently. Director Megaton handles the action with the rapid-cut, blue-filtered zing common to the Besson factory, but things receive a definite boost via the efforts of Saldana, whose performance combines the intensely physical with an appealing soulfulness.

Whether slithering through air ducts in a skin-tight cat suit or using a toothbrush as an impromptu weapon, she somehow manages to maintain an air of beyond-the-call gravitas. Also of note are the scenes of the heroine plying her lethal trade, some of which bear the funky logic-defying influence of Mario Bava’s great fugue-state caper movie Danger: Diabolik. Ultimately, although the story elements and secondary character motivations rarely hang together, Colombiana’s distinguishing marks help place the film somewhere above the level of guilty pleasure. When pitted against the likes of a mobster with a glass-paneled shark tank for a dance floor, reality can take a seat, frankly. –Andrew Wright - read more