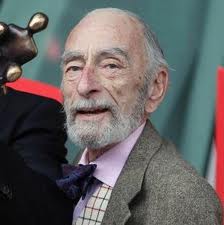 He worked in theatre, television and film for more than 50 years and had continued to work up until last year. He was perhaps most highly-regarded for his portrayal of “Rashers” Tierney in the 1980 RTÉ series Strumpet City . He singled it out as one of his favourite pieces of work.

In 1975 he had a brief but memorable role in Fawlty Towers when he played the part of the hapless builder O’Reilly. He often remarked that he had performed on stage for more than 50 years but the nine minutes on Fawlty Towers made him recognisable all over the world.

Kelly was born in Dublin on July 11th, 1929 and educated at Synge Street Catholic Boys School. He started acting at the age of eight in Dublin’s Gaiety Theatre but also trained as a calligrapher and was a talented watercolour artist.

He was a dapper dresser and known for his colourful bow ties. He later said the bow ties became his trademark as he tried to look the part of a bohemian artist.

He became a familiar face to British audiences in the 1960s and 1970s when he played eccentric Irish characters in sitcoms such as Oh Father, On the Buses and Never Mind the Quality Feel the Width. He performed in 50 episodes of the Richard OSullivan vehicle, Robin’s Nest, in which he played the one-armed dishwasher Albert Riddle. Other television work included Glenroe, Ballykissangel and Emmerdale Farm.

He had a long list of film credits including the 1969 version of The Italian Job, Into The West and Waking Ned , which he credits for making him a sex symbol after he appeared nude on a motorbike.

He also appeared in films such as Agent Cody Banks 2, Laws of Attraction, Stardust and Charlie and the Chocolate Factory , in which he played Grandpa Joe Bucket. He had been tipped for an Oscar nomination for that role.

On stage he will always be associated with Samuel Beckett because of his legendary performance in the title role of Krapp’s Last Tape . He won many awards and acknowledgements for his work, including a Helen Hayes award for Moon for the Misbegotten , and a Screen Actors’ Guild nomination for Waking Ned.

He won an ESB Theatre Award in 2003 and an Irish Film and Television Academy lifetime achievement award in 2005.

He recalled that he regularly played people much older than himself. In 2005, he told The Irish Times : “I remember, six years ago, on my 70th birthday, some journalist writing: David Kelly is 70 today. But what I want to know is how come he’s been 70 for the past 40 years’. . .”And it’s perfectly true. It’s a very strange thing.” He was asked if he had ever considered retiring and replied “Oh God, no. Ah no . . . I will continue hanging on to the script until they prise it from my cold, dead hands.”

Kelly was married to actor Laurie Morton. The couple had two children, David and Miriam. Funeral arrangements will be announced later.