Man on a Ledge – Movie of The Week

Man on a Ledge 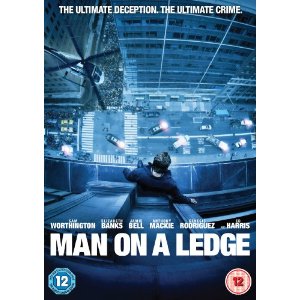 This is the story of a man on a ledge. He is an ex-cop who wants to clear his name but while the police try to talk him down there are other thing going on else where that he is involved in. This movie is in the stlye of Phone Booth, The Inside Man, Dog Day Afternoon and The Taking of Pelham 123. This is well worth the watch and an action packed ride. It was filimed mainly on location on the side of the Roosevielt Hotel (making of the ledge is not a bad making of either). With a cast of Sam Worthington, Elizabeth Banks, Ed Burns Anthony Mackie and Ed Harris this is an allstar cast.

A well-cast thriller with style to burn, Man on a Ledge can’t quite decide if it wants to be a hairpin Hitchcockian exercise in suspense, or a more linear action movie. The script by Pablo F. Fenjves promisingly wastes little time in getting the two nouns of the title together, with the opening scene depicting a mysterious man (Sam Worthington) checking into a swank New York hotel, ordering an expensive meal, and then stepping out of his window for a stroll. But why the choice of this building, in particular? Or his specific request for a boozily disgraced negotiator (Elizabeth Banks) to talk him back inside? And what’s with the clumsy couple attempting to break into the office across the street? All will be revealed, rather unusually quickly.

To his credit, director Asger Leth (a former documentarian) does manage to capture some of the city-as-an-organic-entity vibe that powered such seminal NY films as Dog Day Afternoon and The Taking of Pelham 123. Unfortunately, his gritty sense of style ultimately can’t do much with the increasingly straightforward plot, which telegraphs its curves way in advance. Still, if the narrative shortcomings keep the film from being top-notch escapism, the actors compensate for a lot, beginning with the palpable chemistry between Worthington and Banks and continuing with a wonder of a supporting cast, including Ed Burns as a disgruntled cop, The Hurt Locker’s exceptional Anthony Mackie as an investigating officer with ties to the main character, and especially Ed Harris, as a gazillionaire real estate tycoon who takes visible joy in crushing the spirits of his underlings. If you’ve ever wondered what Scrooge McDuck would look like in human form, here you go. — Andrew Wright on amazon.co.uk

Man on a Ledge Trailer