Act of Valour – Movie of The Week 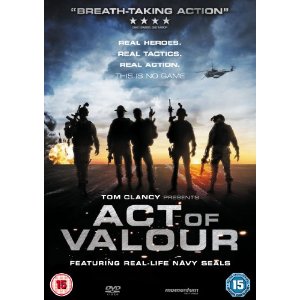 Act of Valour is one of the better action movies you will see this year. The acting is not great, it is a bit wooded. I know they are real Navy seals but the action alone makes up for it. The sound of the bullets is great and the gunboat gun are very loud are they are real bullets. Check out the extra’s on the DVD as some of them are very good (real sub in particular). For all you War Movie fanatics this is a must see.

The below poem is from the movie so i figured it would be nice to include it.

“So live your life that the fear of death can never enter your heart. Trouble no one about their religion; respect others in their view, and Demand that they respect yours. Love your life, perfect your life, Beautify all things in your life. Seek to make your life long and Its purpose in the service of your people.” – Chief Tecumseh

Act of Valour aims to capture the experience of Navy SEALs as they combat the schemes of a Chechnyan jihadist who wants to send suicide bombers into American stadiums and shopping malls. Their efforts take them all over the world, from Costa Rica to Somalia to the South Pacific. For added authenticity, eight real Navy SEALs have been cast in the lead roles. In terms of tactics and equipment, Act of Valour is rigorously authentic. What marks this as fantasy is the perfection of the missions (there are no civilian casualties; every sniper takes out his target in a single head shot–there are a lot of exploding heads in this movie) and absolute moral clarity (the wild-eyed jihadist and drug cartel foot soldiers are unquestionably evil; one of the main characters carries his grandfather’s folded flag from World War II).

The performances of the SEALs, though well intentioned, make you appreciate the complexities of Arnold Schwarzenegger. What’s smart about Act of Valour is that it doesn’t waste much time with setups or dialogue, but heads straight into the missions. However, much of these missions are filmed like a first-person-shooter video game, which lends a sense of immediacy but undercuts the sense of reality. Still, all in all, Act of Valour is a sincere attempt to express admiration for the men and women risking their lives in the military. –Bret Fetzer — read original

This entry was posted in Movie Of The Week, Movies and tagged Movies. Bookmark the permalink.