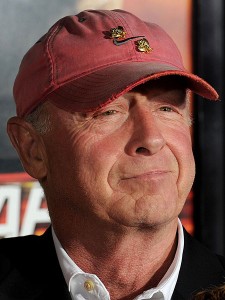 Action movie maestro Tony Scott reportedly battled inoperable brain cancer before he jumped from a Los Angeles bridge and died Sunday.   ABC News reported the diagnosis citing a source close to the famed director of “Top Gun,” “Beverly Hills Cop II,” and “Crimson Tide.”   “The autopsy is scheduled for this morning. We might (see a brain issue), but we don’t have anything medically confirmed at this time,” Ed Winter, the assistant chief coroner for Los Angeles County told the Daily News.

Scott, 68, parked his car at the crest of the Vincent Thomas Bridge spanning Los Angeles Harbor, about 185 feet above the water, and leaped to his death as witnesses looked on in horror.

Multiple bystanders called 911 around 12:35 p.m., police said.   Rescue divers recovered his body from the murky harbor hours later, police said.   The British-born director was survived by his third wife, Donna Wilson Scott, and their twin sons.   “I can confirm that Tony Scott has passed away. The family asks that their privacy is respected at this time,” his spokesman Simon Halls said in a statement.

This entry was posted in Movies, News and tagged News, RIP. Bookmark the permalink.