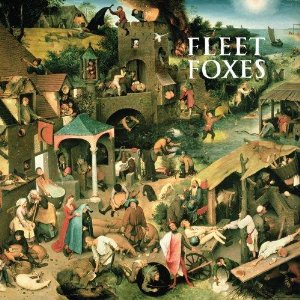 It’s now twenty years since grunge emerged from then culturally isolated Seattle and Fleet Foxes, the eponymous debut album from the city’s latest heroes, demonstrates just how much American independent rock has mutated in that time. The five young members of Fleet Foxes make up a very different sort of rock band, describing their own music as “baroque harmonic pop jams”. Even that understates the depths of the quintet’s effortless vocal harmonies and gently woozy, folky feel. Of their contemporaries only the enigmatic Midlake and My Morning Jacket at their most fragile come close, but neither could have cooked up the Beach Boys spiritual of “White Winter Hymnal” or its more powerful companion piece “Ragged Wood”. In fact Fleet Foxes happily admit to aspiring to an earlier tradition–not just obvious antecedents like the Byrds, the Association, Neil Young and, especially, David Crosby’s famously unfocussed solo album If Only I Could Remember My Name but ancient English folk songs and their later American descendents. All were hunted and gathered from the internet–songwriters Robin Pecknold and Skye Skjelset are barely in their twenties. Add a host of unlikely instruments and the results are stunning, the complete antithesis of mainstream stadium indie that has followed Arcade Fire. Still, the cover features a Bruegel painting of peasants that might have graced any Black Sabbath sleeve. In that way at least Fleet Foxes salute a local tradition. -—Steve Jelbert – click here to read original article

You could call this a folk album. You could call it Americana or Alt- Country. This album alone is seen as the album that reawakened the folk scene and put it back on the map. Following on from this album came some many acts that hung out in the wilderness of Folk/Americana/Alt-Country that included Bon Iver, The Low anthems and J. Tillman. Fleet Foxes are most renowned for there harmonies and their Neil Young influences. Hailing from Seattle,  there is no grunge here. Enjoy.

<- Back To Album Selection Page