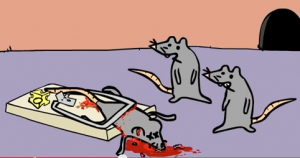 A Cork artist’s animated shorts, uploaded for a laugh, have become an internet sensation

THE PAST FEW months have moved quickly for Jason Sullivan. The Corkman is the creator of Sminky Shorts, a series of animations that have close to four million views on YouTube. Sullivan, a second-year multimedia student at Cork Institute of Technology, began to upload the cartoons, which feature animals with distinctive Irish accents, after his exams last May, using the pseudonym Andrew James.

In the 14 weeks since then they have gained a cult and then a mass following. Sullivan’s hairdresser recently began telling him about the hilarious videos she was watching online, not realising he was their creator. “It was a very uncomfortable situation,” Sullivan says when we meet in his apartment in Cork.

Last week, Sullivan signed a contract with United Agents in London, which also represents Ricky Gervais, Sophie Dahl and Clive James. The agency is understood to be talking to broadcasters, merchandisers and corporate marketing departments interested in working with the 27-year-old self-taught animator.

Although Sullivan has been creating comic material privately for some years – before he returned to college he worked as a graphic designer – he says the short animations were meant only as teasers, and his goal is a cartoon series, much of which he has already written.

Within a few weeks of uploading the animations friends told him they were hearing the catchphrases of his creations, such as “I can’t do it”, repeated in bars in Cork. The accents and phrases are very Irish, but his animations are connecting with international audiences.

“I only made them for a laugh and was surprised when they began to be viewed, especially outside Ireland. My brother said that more people in Vienna have seen them than in my hometown of Kanturk.”

Sullivan has uploaded 11 animations, including Tommy, a 57-second animation that features two tortoises with heavy rural accents commenting on another tortoise that can’t slow down. This clip has been viewed more than 700,000 times.

Enrolling at Cork Institute of Technology gave Sullivan the impetus he needed to format his comic thoughts and part-time creations. He benefited from the animation module on the course. His animations usually start with a phrase or scenario, and rely heavily on the vernacular.

His partner, Annette, says they’ll be on a bus or sitting in their apartment when he’ll start laughing out loud and another scenario will be born.

“A lot of the characters are exaggerated versions of people I know. I do all the voices and make them here in my apartment, recording the voices in my room.”

Does he feel under pressure to create more material now or to adapt what he has for other audiences or television executives?

“Not at all. The stuff I have released is only the tip of what I have already created. I’ve been working on this for years on my own, and the plan was to make a pilot for a cartoon. That has been put on the long finger now, as everyone wants more of these shorts. I know this is a phase right now, and it mightn’t last forever, so I need to capitalise on it.”

He now has to get to grips with copyright issues to prevent people taking his content and passing it off as their own. He also needs to be wary of signing away any rights in a broadcast or merchandise deal. With the London agency now on board, he expects to make more informed commercial decisions.

“I’d like to finish the college course,” Sullivan says of his four-year degree, “but I have had so many job offers. I’ve basically been offered the job I would have hoped to get when I finish the course, so we’ll have to see what happens next.”

How has his mother reacted to his sudden fame? “My mother loves it. When she goes into the local supermarket in Kanturk, lots of people have been coming up to her and calling her Mrs Sminky.” – read original article

This entry was posted in News, Viral Video Of The Week and tagged Viral Video. Bookmark the permalink.

2 Responses to Sminky Shorts – Viral Video of The Week