Black Swan – Movie of The Week 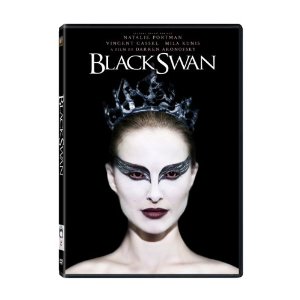 Given that this film is directed my Darren Aronofsky, You know its is going to be very good and different in the same way. Darren Aronofsky also directed (PI and Requiem for a dream and the wrestler). The first thing you notice is the in your face camera adopted in most of Darren Aronofsky movies. The big thing about this movie is the part played by Natalie Portman who plays a ballet dancer. She spent 8 months becoming a ballet dancer to make this role her own and deserves her Oscar nod. This movie also stars Vincent Cassel, Mila Kunis and Barbara Hershey plays a very over baring mother. This is a great movie and well worth the money. The music is great and the acting is very good.

Feverish worlds such as espionage and warfare have nothing on the hothouse realm of ballet, as director Darren Aronofsky makes clear in Black Swan, his over-the-top delve into a particularly fraught production of Swan Lake. At the very moment hard-working ballerina Nina (Natalie Portman) lands the plum role of the White Swan, her company director (Vincent Cassel) informs her that she’ll also play the Black Swan–and while Nina’s precise, almost virginal technique will serve her well in the former role, the latter will require a looser, lustier attack. The strain of reaching within herself for these feelings, along with nattering comments from her mother (Barbara Hershey) and the perceived rivalry from a new dancer (Mila Kunis), are enough to make anybody crack… and tracing out the fault lines of Nina’s breakdown is right in Aronofsky’s wheelhouse. Those cracks are broad indeed, as Nina’s psychological instability is telegraphed with blunt-force emphasis in this neurotic roller-coaster ride. The characters are stick figures–literally, in the case of the dancers, but also as single-note stereotypes in the horror show: witchy bad mommy, sexually intimidating male boss, wacko diva (Winona Ryder, as the prima ballerina Nina is replacing). Yet the film does work up some crazed momentum (and undeniably earned its share of critical raves), and the final sequence is one juicy curtain-dropper. A good part of the reason for this is the superbly all-or-nothing performance by Natalie Portman, who packs an enormous amount of ferocity into her small body. Kudos, too, to Tchaikovsky’s incredibly durable music, which has meshed well with psychological horror at least since being excerpted for the memorably moody opening credits of the 1931 Dracula, another pirouette through the dark side. –Robert Horton – click here to read the original article