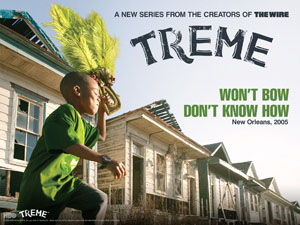 We think Treme is a great Tv Series and this is a Teaser trailer for season 2 featuring a great poem by Gian Smith called “O Beautiful Storm”. Gian Smith had been invited to perform his poems at an October Tulane symposium on Treme that was filmed for HBO’s website. His conflicting feelings about Katrina and what it meant to him, his family, and New Orleans residents resonated with the HBO team and spread to the show’s producers. They hadn’t necessarily been looking for a poem to capture the complicated emotions of Katrina’s survivors, but they couldn’t pass it up when they found it.

Gian Smith is a popular local performing artist in his home city of New Orleans. He is an accomplished writer and personality. He is perhaps best known to the masses as a spoken word poetry artist and is most notably acclaimed for his work with the HBO television series “Treme.” His talents not only include performance but also writing and directing. – read more on imdb.com click here

I got the Rain in my veins…
The flood water in my blood makes my heart beat harder.
I’ve got the scent of the death and decay in the wind
Sinking into my nose and under my skin.
She’s the music in my ears, and the mold in my soul.
Move with her like bellies to congo drums
Write a sonnet to her, serenade her, recite her a poem.
Bump her like sissy bounce or mellow into her like Marsalis.
Let her weave through your brain like a song has moved you
And you can stop the flow…
But don’t let her go.
Last night, on my knees I scrubbed and scrapped
Katrina from the tiles of a house that would one day
Belong to my kids who’d have no idea there was a remain
Underneath the sofa, I had purposefully not wiped away.
Cause while Hugo and Andrew talked a good game
In the end all they did was ride the Gulf to the lake
And kick up a few waves and make a few trees shake
But Katrina had foresight and long term goals.
Bear her like ungratifying child labor of a stillborn
Answer to her, embrace her. Make passionate, steamy love to her til you moan.
Let her consume you on holidays and special events
Not meant to be spent alone.
Do what you must, but don’t let her go.
She’s Death’s greatest stage
She’s the 11th plague
She’s five men dead in a truck from a murderous rampage.
There is no fury like her rage hell bent.
The apocalypse heaven sent.
A city’s extinction level event.
She’s men’s residence changing homes,
Chickens coming home to roost again.
She’s man exalting science as defense
From God, being overthrown
She’s the perfect combination of wind, neglect
And Amir’s criminals in City Halls and black robes
Whose Congressional bills pass at levees expense,
Whose gavel smacks smash homes and crack domes.
Beat her to let her know you care.
Hate her on the streets in front of your friends for show.
Love her behind closed doors at home.
She’s a summer rain, a gentle breeze blown,
And an infamous name that our hearts now own.
O’ beautiful storm, I won’t let you go.

This entry was posted in News and tagged News, Viral Video. Bookmark the permalink.