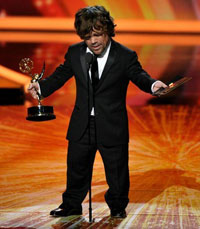 It was a big night for the cast of “Modern Family” at the 2011 Primetime Emmy Awards, with the series picking up an impressive 5 trophies, including ‘Outstanding Comedy Series’ for its second straight year.

The series was on such a big winning streak that host Jane Lynch even joked, “Welcome back to the ‘Modern Family’ awards!” after a commercial break.

“Mad Men” cemented its status as THE drama to watch on television, picking up an Emmy for ‘Outstanding Drama Series’ – its fourth consecutive win.

A very excited and surprised Kate Winslet picked up her very first Emmy for her lead role in “Mildred Pierce”. Also an Oscar winner, Winslet said in her speech, “I didn’t think we were going to win anything. Oh look, I really did win it!”

Some humble awww-worthy moments also happened last night at the show, with Charlie Sheen expressing his best wishes for “Two and a Half Men” – the series that fired him and replaced him with Ashton Kutcher. Sheen said, “From the bottom of my heart, I wish you nothing but the best for this upcoming season.”

Julianna Margulies picked up her second consecutive Emmy for her lead role in “The Good Wife” and in her touching speech, said “To my spectacular husband, I love being your good wife.”