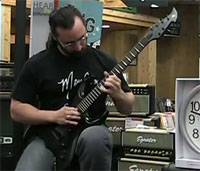 Found this the other day – World’s Fastest Guitar Player – Record Setter (formerly URDB) AND Guinness Official Record. I figured i knew a few fast guitar players but this is ridiculously fast. Some might even say that John Taylor is a plucking Leg-End. (pardon the pun’s)

On 4/23/2011 I, John Taylor, made a new world record attempt for Universal Record Database and Guinness World Records for Flight of the Bumlbebee at 600 BPM.
Both Record Setter (formerly URDB) and Guinness have approved this attempt as the official record for fastest guitar player. WoW.