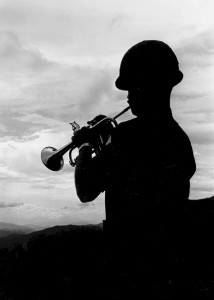 “Taps” is a musical piece sounded at dusk, and at funerals, particularly by the U.S. military. It is played during flag ceremonies and funerals, generally on bugle or trumpet, and often at Boy Scout and Girl Scout/Guide meetings and camps. The tune is also sometimes known as “Butterfield’s Lullaby”, or by the first line of the lyric, “Day is Done”.

I tell you a mystery. We shall not all sleep, but we shall all be changed, in a moment, in the twinkling of an eye, at the last trumpet. For the trumpet will sound, and the dead will be raised imperishable, and we shall be changed — Corinthians 15:51,15:52

The tune is actually a variation of an earlier bugle call known as the Scott Tattoo which was used in the U.S. from 1835 until 1860, and was arranged in its present form by the Union Army Brigadier General Daniel Butterfield, an American Civil War general and Medal of Honor recipient who commanded the 3rd Brigade of the 1st Division in the V Army Corps of the Army of the Potomac while at Harrison’s Landing, Virginia, in July 1862 to replace a previous French bugle call used to signal “lights out”. Butterfield’s bugler, Oliver W. Norton, of Erie, Pennsylvania, was the first to sound the new call. Within months, Taps was used by both Union and Confederate forces. It was officially recognized by the United States Army in 1874.

“Taps” concludes many military funerals conducted with honors at Arlington National Cemetery, as well as hundreds of others around the United States. The tune is also sounded at many memorial services in Arlington’s Memorial Amphitheater and at grave sites throughout the cemetery. see original.

This entry was posted in Music, News and tagged Music, News. Bookmark the permalink.