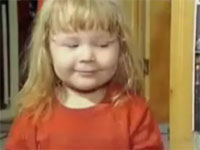 This week Viral Video of The Week comes from America where a couple named their three chrildren Adolf Hitler Campbell, JoyceLynn Aryan Nation Campbell and Honszlynn Hinler Jeannie Campbell. The first thing that came to me after watching this was Why? Who names their kids Adolf Hitler!! Not too sure if i should laugh or cry.

Holland Township, N.J. – Three New Jersey siblings whose names have Nazi connotations have been placed in the custody of the state, police said Wednesday.

Harris said family services did not tell police the reason the children were removed. Agency spokeswoman Kate Bernyk said it does not comment on specific cases.