I Name You Dovahkiin (Skyrim) 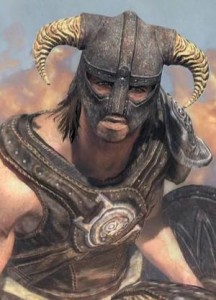 I read this article today on The Irish Times. There are things you should not name you child and Dovahkiin is it. Why name your child after a Skyrim character…

HOW FAR would you go to win some free videogames? One couple decided a lifetime supply was worth naming their child after a game character.

The challenge was laid down by Bethesda Softworks last February. Have a baby on November 11th and name it after Dovahkiin, the player character in The Elder Scrolls V: Skyrim and Bethesda would reward the lucky parent with a Steam key that will give them access to every Bethesda game ever made, past and future – for life.

So while the parents get to play Bethesda games in-between changing nappies, feeding and doing all the other things that go along with newborns, the child gets to spend the next few years hearing the story about how he got his name, which translates as “Dragonborn” in dragon language.

The challenge came with a disclaimer: “Any reward for completing this quest will not ultimately justify the potential teasing your child could – and probably will – endure over its lifespan. Bethesda Softworks is not responsible for your parenting.”

There was a winner. Megan and Eric Kellermeyer stepped up, named their son Dovahkiin, and claimed the prize from Bethesda.

As names go, it’s not the worst. Sure, it’s a bit difficult to get to grips with spelling as a five year-old, but luckily for young Dovahkiin, his parents have given him what they assure readers of their blog (56shards.com) is a normal middle name (that is, Tom). If it all gets too much for him, he has that to fall back on.

Plenty of people take inspiration from TV shows or films for their children’s names. There’s a whole generation of Irish Kylies and Charlenes, more than likely inspired by Minogue’s stint on Neighbours . And there are more than a few Britneys floating around.

Games have become so entwined in everyday culture, it wouldn’t be surprising if prospective parents used the names in some of the more popular titles as inspiration.

The day you meet a Pikachu though, you’ll know it’s gone a little too far.