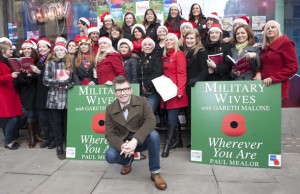 Over the weekend we saw the announcing of the top 10 singles for England(UK) and Ireland. Who would be the Christmas number one. I Ireland it went to form with the x-factor single(Little Mix “Cannonball”) winning with a close second from Saw Doctors feat. Petula Clark with “downtown”. In the UK the x factor winning song lost our to the Military Wives With Gareth Malone with a song called “Wherever You Are”.

The official video for Paul Mealor’s Wherever You Are by Military Wives with Gareth Malone.

‘Wherever You Are’ is a moving love song written by Royal Wedding composer Paul Mealor for the choir to sing at The Royal British Legion’s Festival of Remembrance. The music is set to a poem compiled from letters to and from the servicemen and their wives on a 6-month tour of duty in Afghanistan. It is the raw emotion of the song that has touched so many of the British public.

Below is a list of the top 10 of both England(UK) and Ireland.

This entry was posted in Music Of The Week, News and tagged Music. Bookmark the permalink.