The best and most beautiful things in the world cannot be seen or even touched. They must be felt within the heart. - Helen Keller 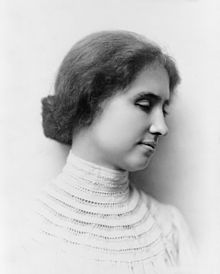 Helen Adams Keller (June 27, 1880 – June 1, 1968) was an American author, political activist, and lecturer. She was the first deafblind person to earn a Bachelor of Arts degree. The story of how Keller’s teacher, Anne Sullivan, broke through the isolation imposed by a near complete lack of language, allowing the girl to blossom as she learned to communicate, has become widely known through the dramatic depictions of the play and film The Miracle Worker. A prolific author, Keller was well-traveled, and was outspoken in her anti-war convictions. A member of the Socialist Party of America and the Industrial Workers of the World, she campaigned for women’s suffrage, labor rights, socialism, and other radical left causes. She was inducted into the Alabama Women’s Hall of Fame in 1971. see more on wikipedia