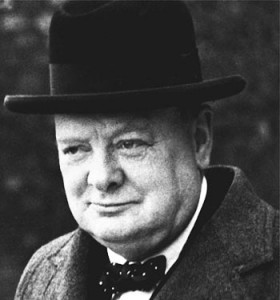 Sir Winston Leonard Spencer-Churchill, KG, OM, CH, TD, PC, DL, FRS, Hon. RA (30 November 1874 – 24 January 1965) was a British Conservative politician and statesman known for his leadership of the United Kingdom during the Second World War. Widely regarded as one of the greatest wartime leaders of the century, he served as Prime Minister twice (1940–45 and 1951–55). A noted statesman and orator, Churchill was also an officer in the British Army, a historian, a writer, and an artist. He is the only British prime minister to have received the Nobel Prize in Literature, and was the first person to be made an Honorary Citizen of the United States. – see wikipedia for more